A night full of fireballs

A night full of fireballs 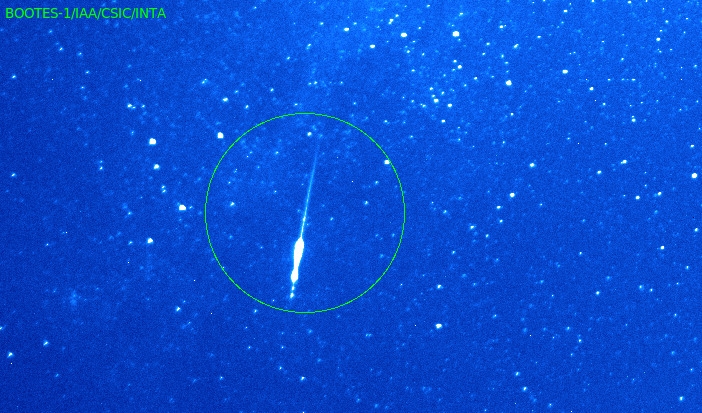 The month of July ended with a night full of fireballs. In this time of the year various meteor showers coincide – some of them classified even as major ones. In addition to the antihelium sparks we have Australid pisces, the γ-Dragonids of July, the δ-South Aquarides, the α-Capricornides and the progressing, always spectacular Perseids.

The network of the Universidad de Málaga, the Sociedad Malagueña de Astronomía and the Red Global BOOTES (IAA/CSIC) could record 27 videos of fireballs among which – except for the Australid pisces – we find meteors associated to the mentioned showers and some “spontaneous”. We will describe here the three most interesting ones.

The first one, which was quite long, almost 3 seconds, was recorded at 11:10 pm local time by the stations of Segorbe (UMA/SMA/J. Castellano) and Rubì (UMA/SMA/L. Rubio).

Independently from the showers classified by IOM, the inclination of its orbit yielded an inclination of i=18º.2 with an eccentricity of e=0.75   and a semi-major axis a=3.5U.A.

The other two exposed here were recorded on video in the stations of Dehesa San Francisco (UMA/SMA/Fundación Monte Mediterráneo) and Sierra de Fuentes (UMA/SMA/UEX) and then composed to images by the observatory BOOTES-1 (IAA/CSIC/INTA). The first one was produced 01:22 a.m. local time.

It flew from the North of the Málaga province inland towards Sevilla and descended from km 84 to km 44 covering a distance of 22 km at 73.400km/h.

Only half an hour later, at 01:55 am local time, an α -Capricornide overflew the West of the Huelva province towards the North. In the image you can clearly see the fragmentation which is typical for these meteors whose parent body is the comet 169P/NEAT.

It reached an absolute magnitude inferior to a-8 with a photometric mass estimated inferior to 10g. In the graphic below the variation of luminosity in relationship to time can be observed (the lower the more brilliant) besides the peaks due to the fragmentation.